On the 4th of August 2022, Fox was pardoned by the Governor General of St. Kitts and Nevis after serving 25 years and is now a free man living in the UK. Gary Strydom speaks […]

Arthur Jones Is Asked About Mentzers and Viator

Mentzer/Viator question directed at Arthur Jones Question at 8:45 on video: Caller: I would like to know why that none of the top bodybuilding champions are staying with Nautilusin Deland like the Mentzer brothers or […]

Joe Weider The small ads in the back of Weider magazines for Gold’s Gym tanks and T-shirts were half Gold’s Gym’s revenue in 1979. Weider pulled ads mysteriously. Connors had 2 theories. Weider saw Gold’s […]

Does the video below demonstrate a test of skull strength, neck strength, leg strength, all three, or something else? It’s more of a pushing contest than actual head butting. Even with head to head pushing, one wonders how what’s housed within a human skull, aka a brain, fares long term after enduring the intense pressure of a goat’s skull, which is “designed to absorb a force 60 times more powerful than a human skull”. Not only that, goats can run up to 50 miles per hour in short bursts. If this goat was giving its all, the man was holding back an up to 50 mph goat. Conversely, say the man could run 20 miles and hour at maximum speed, the goat still has more potential energy speed-wise to displace the man. The goat also has an additional set of legs for traction, double the man. We don’t know the weight of that particular goat but they can weigh up to 310 pounds, while the man probably weighs roughly 200 lbs. All things considered, the man held his own against the goat but, given that the goat is built for such an activity, there are likely more risks for a human, than for a goat, engaging in this effort.

An interesting fact about the human skull is that female skulls are actually thicker on average than male skulls. Male skulls, however, are bigger.

Why it’s not a good idea to go head to head with a goat:

The ability to headbutt is built into a goat’s DNA, and the animal’s skull is designed to absorb a force 60 times more powerful than a human skull.

Below is John Ferraro aka The Hammerhead.

John shocks scientists and amazes audiences with his ability to withstand incredible amounts of force to his head, with apparently no negative side effects. The average human skull is 7 mm thick, but an MRI scan revealed that John’s is 16 mm! This biological advantage allows him to achieve feats like repeatedly head-butting nails into wooden planks encased in metal, with nothing but a thin piece of cloth between his forehead and the nail head.

In the dinosaur world, Pachycephalosaurus are known for their up to 10 inch thick(25 cm) skull but their ramming abilities are debated.

Given that cows (generally speaking) utilize a similar headbutting style and actually can weigh in far heavier than even the largest Pachycephalosaurus, I think it’s safe to say that a huge Boer or Pakistani goat could OHKO a Pachycephalosaurus with relative ease.

Plus, goats have horns. Even the shortest goat horns are punishing weapons capable of inflicting grievous injuries.

In drawn-out combat? I think the Pachycephalosaurus would win – that flankbutting arsenal is brutal, and even the biggest and toughest goat would crumble under that kind of repeated assault.

But in just a single, head-on-head headbutt? The goats’ got this one. 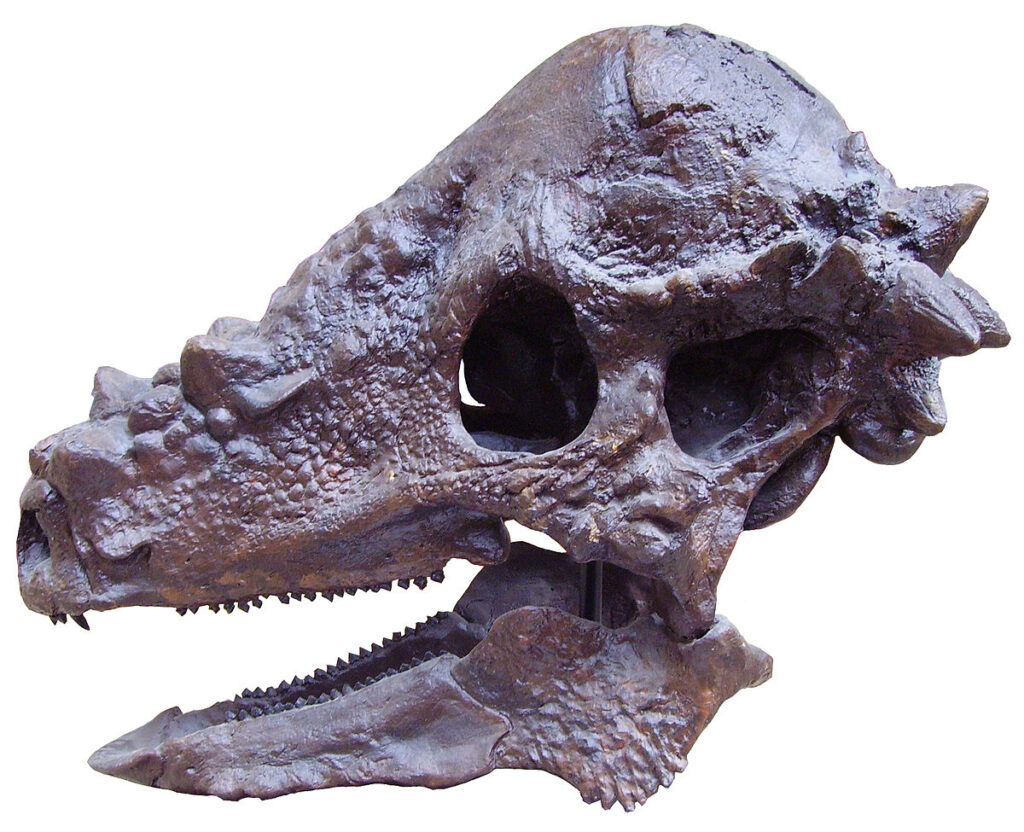 While some speculate that a goat may win in a head-on-head headbutt against a Pachycephalosaurus, there is little debate as to how a goat would fare against a Tyrannosaurus:

Which finally leaves us with all the carnivorous dinosaurs in Jurassic World Evolution 2 eating goats: