Arnold Schwarzenegger Sued by the Predator, and Other Weirdness

More DallE Mini experiments… At the present time, the more well known the name, the more accurate the AI results will be. That’s why we’re inputting “Arnold Schwarzenegger”‘ and “Lou Ferrigno” more than others. Currently, […]

Further experiments with AI illustrations using DALL·E mini. The app gives you a block of 9 images based on your text input. The line drawing in the banner illustration above is supposed to be the […]

Arnold Schwarzenegger is part of a group of bodybuilders featured in a 1971 Chevrolet commercial directed by Victor Haboush. He’s the one deadlifting the back of the car. The spot was filmed in Malibu and also featured Steve Merjanian, Jim Morris, Ric Drasin, Reg Lewis, and Chuck Faust. It was Arnold Schwarzenegger’s first commercial. 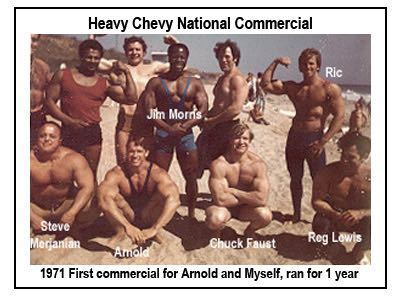 The Chevrolet Chevelle is a mid-sized automobile which was produced by Chevrolet in three generations for the 1964 through 1978 model years. Part of the General Motors (GM) A-Body platform, the Chevelle was one of Chevrolet’s most successful nameplates. Body styles include coupes, sedans, convertibles and station wagons. Super Sport versions were produced through the 1973 model year, and Lagunas from 1973 through 1976. After a three-year absence, the El Camino was reintroduced as part of the new Chevelle lineup. The Chevelle also provided the platform for the Monte Carlo introduced in 1970. The Malibu, the top of the line model through 1972, completely replaced the Chevelle nameplate for the redesigned, downsized 1978 model year.